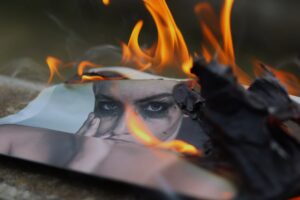 Let’s say you’re in a dynamic where you know, you know, that everyone has banded together in dislike of you. Could be your job, your neighborhood, or wherever you’re stuck spending a ton of time. It’s clear they talk smack about you. They’re united in making fun of your looks, your voice, your clothes, your walk, your everything. But you don’t know why.

And you’re the only one in the joint who’s connected to nobody. Zero friends. It’s the whole place versus you.

Now imagine they’re all in a room, these former friends of yours, and they don’t know you’re outside the door. You have the option of standing there to hear whatever it is they’re saying. You know it will hurt, but you can’t not. You need to know what they’re saying. Right? Right.

And you’re…however old you are.

Now imagine how obliterating this would be for a high school kid.

This is why teenagers feel they need their phones. Their peers, as vital to them as the pack is to the wolf, are talking on social media. Around the clock. Possibly about them. Knowing what people are saying is the only way to stay safe.

To achieve anything with teens, there’s one rule that’s absolute: don’t try to control them. Always, control attempts will backfire.

When the nightmare comes true — when a kid is cast out of favor and they become the target of cruelty — the anxiety is supercharged. Kid will fight you to the death to keep their clutch on their phone. Snatching it out of their sweaty, paranoid hands might feel like you’re doing them a service. Think again.

In my work as a teen life coach, I’ve learned there is one rule that’s absolute: don’t try to control them. Always, control attempts will backfire. Why? Because the driving force in adolescent development is to grow into autonomy. The teen brain is preparing itself for self-sufficient adulthood. Following orders is what the small child does, subconsciously understanding that to do so is to stay safe, warm and fed by their caretaker.

But the young adult is just that: a young adult. Their behavior is driven more by the urge to flex power than to remain in the safe bubble of parental approval. If push comes to shove, their subconscious says, I can build my own hut and catch my own dinner. So nah, mom. I’m doing what I want.

If what they ̶w̶a̶n̶t̶ need is to keep their eyes on their phone, they’ll do whatever it takes. And if you’ve been around teens, you know “doing whatever it takes” can translate to some unsavory behaviors.

So spare yourself the screaming match, and spare the kid the midnight climb out the window, the drop down two stories, and the sprint to the friend’s car to check their Snapchat. Instead, approach your kid like you’re a teen life coach. Seek to understand them, and help them discover their own best options.

This is why teenagers feel they need their phones. Knowing what people are saying is the only way to stay safe.

To start understanding the kid, let’s go back to that online bullying thing. Moment of awkward truth: I’ve been social media bullied. Like, as an adult. A group I’d been a part of for years suddenly turned against me en masse. There was a ringleader. There were henchmen. There were threats and lies and comments about my nose. (My nose? My nose.) It was a whole thing.

My takeaway: being mass-hated is staggeringly scary. I am a respected, degreed professional author and teen life coach. I am in a secure, loving relationship. I have a dog. I have a home. I have money in the bank. And I was having heart palpitations over what was being said by chowderheads on Facebook. I know. I told you. Awkward.

Moving on. My point: kids aren’t overreacting with their fears around commentary on social media. This is basic human need stuff.

Hominids are programmed to crave connection with others. Why? Survival. Your teen might know they can build their own fire and catch their own fish, but from an evolutionary perspective, they can’t do much more. No single human can simultaneously build fire and catch fish and construct huts and birth kids and fashion weapons and pick berries and fight off predators and you get the idea.

I asked Dr. Lucie Hemmen, a clinical psychologist who specializes in teens and young adults, for the evolutionary biology behind the drive to stay connected. “Isolation equalled certain death,” she explained. “It makes sense that people go to dark places when they feel disconnected.”

When I was in the throes of my bullying spin cycle, it felt like my brain was on fire. The question of what might be happening in the comments thread was red hot and all consuming. I had no choice but to check, and recheck, and recheck —I was the rat in Skinner’s box, pressing the lever for a food pellet. Every time there was a new post about me it conditioned me further, confirming my need to repeat the behavior. This was evidence of my loss of connection to others. I had to remain vigilant.

Does this sound like the behavior of a degreed, respected, dog-owning professional? Perhaps no. But it does sound like a hominid.

“​Even if our rational brain knows stressful times will end,” Dr. Hemmen said, “and things will get better, at a cellular level, we still equate disconnection with vulnerability.”

We can’t halt the fear. It’s programmed into us. So when I kid is being bullied on social media, taking their phone away, preventing them from monitoring their connection status, can be a form of torture.

But you’re just as desperate. I know. In my role as a teen life coach, I hear from all the parents. One of them reached out for help when her kid was the target of a vicious, school-wide, electronic bullying campaign. Her words:

“The messages she’s getting are shockingly cruel. Are these teenagers or trained assassins? She won’t leave her room, she can’t sleep, she slams and locks her door if I say I’m going to take her phone overnight. What should I do?”

The short answer: do what a teen life coach would do. Ask her what she thinks.

When I kid is being bullied on social media, taking their phone away, preventing them from monitoring their connection status, can be a form of torture.

You already got the absolute don’t-do with teens; this one’s the absolute do-do. It’s the beginning of the fix of everything. That biological drive for autonomy? It can be met linguistically as well as physically. Ask a kid for their thoughts and listen — just listen— to their words, and you activate reward neurons in their brain. They feel heard. They feel respected. It’s the biggest little thing you can do to win with teens.

For a kid who’s strung out on their phone, terror-stricken with each notification but unable to look away, hashing it out with an empathetic listener can cease the cycle. In session with the frantic mom’s kid, my questions included the following:

In answering these questions, the teen was able to step back from the searing stimulus on her screen, evaluate it through a more clinical lens, conceptualize a different outcome, and begin to create that new experience.

Critical tidbit: throughout the process, she felt a sense of control — the opposite of what she’d experience if mom had taken her phone. Our session explored her take on what was happening. She chose her role model. The solutions stemmed from her ideal reality. Because it all came from her, she felt not only capable of dealing with the situation, but motivated to take action.

And it worked. It worked like magic. The morning after our session, I woke up to an email from mom: “She asked me to keep her phone last night. She asked me.”

Next morning, another email. “Night two of her phone in my nightstand. It’s a miracle!”

With the power — and the phone — in her own hands, she took care of herself by putting the phone down.

Teens know what they want and need. They know what feels good and what doesn’t. Given the opportunity to unravel the tangle and lay it out flat, they also know the fix for their struggles. We just have to listen to them. And let them keep their phone.